He stood alone. The Pestilence had swept
In fearful might across the land, and Death
Had laid the bravest of his warriors low.
The fertile vales, through which the Saco rolls
His glistening waters, and the forest glens,
border on the winding Ossipee,
Were now the resting-place of half his tribe.
He stood alone, like some tall oak, whose trunk
Has brav’d the storms of centuries, and seems
With every tempest coming down, yet clings, –
And clinging, leans, and leaning, looks more grand, – Unto the earth in awful majesty.
– Not one of his kindred lived. Not one,
Whose blood drew animation from the fount
Whence sprang his own, remained. With him expir’d
The line. – His soul grew dark: His spirit sank
Within him; for the young, whom he had taught
The arts of war, and tutor’d in the chase,
Shrank from him as he pass’d, or smil’d in scorn.
The sun-light of his heart wax’d dim and faint
He stood alone; all had forsaken him,
And Desolation threw around his breast
A night of gloom. O, ’tis a dreadful fate
To be, when all we love are torn away;
When none are left to cheer ’mid strife and toil,
To breathe one prayer, or call one blessing down
Upon our souls! It may be borne, but O!
It is not – is not Life!

Weary and sad,
For unsuccessfully the live-long day
Had he pursued the chase, his eagle eye
Beheld, not distant far, blue wreaths of smoke
Up-curling from a lonely cot. He knew
The white man dwelt within it, yet he turn’d
Not hence. Slowly he enter’d, and his limbs
Trembled with fear beneath him when he saw
A fair-hair’d girl, the only tenant there.
Scorn’d, hated and derided by the young
Of his own race, he scarcely durst to look
Upon the maid before him. Falteringly
He told his wants. With that sweet sympathy,
Which dwells, and only dwells in woman's heart,
She ministered to his necessities;
And ere he left that humble cot, to trace
Again his forest paths, he swore an oath
Of firm, eternal friendship to the whites.
Time fled apace, and pale Consumption mark’d
That lovely maid as his own victim; gave
A wild and glassy brightness to her eye,

And stamp’d upon her cheek his hectic seal.
Day after day the aged warrior watch’d,
With anxious gaze beside her couch; and brought
From field and mountain plants medicinal,
Which he had learned in youth, to soothe her pangs,
To mitigate her anguish, and restore
New energy to her exhausted frame.
But vain was all his kindness! vain his skill!
She died! and, sick of grief, Chocorua
Beheld her form placed in the icy tomb;
Then fled to his deep forests. But as oft
As Autumn look’d upon the verdant fields,
And, with a magic frown, chang’d their fresh hues
To yellowness, a hoary man was seen
Weeping above her grave.

At length dread war,
With all its horrors, burst upon his tribe.
Their wigwams blaz’d, their blood in rivers pour’d;
And every gale, which swept their woody hills,
Was laden with wild yells and dying groans.
Chocorua slept idle in his hut.
His bow and quiver hung upon the wall:
His knife and hatchet rusted in his belt:
He could not strike: Her spirit stay’d his arm!
– Madden’d, his tribe, in angry council met,
Condemn’d him to the rocky mount which bears
His name. Among its lonely caves he hoped
To dwell in quietness. To him they spake
A kindred language, and his spirit grew
Familiar with their speech.

He stood alone–ay–all alone! The tide
Of war had burned in its crimson flood
The forest children – save a few; and they,
In grief and terror, turn’d their weary steps
To the declining sun. Unhappy race!
Ill-fated line! all – all are gone! – The hill
No more gives back an echo to their songs!
No more the vale resounds to the quick tread
Of feet in warlike dance, or joyous round
Of festal merriment! And thou, bright Bay,
Whose light, unfetter’d waves so oft have borne
Upon their burnish’d crests the swift canoe,
No longer mirrorest the noble form
Of the proud man in thy sleepless depths!
Thou, too, famed Hope! upon whose brow the glow
Of parting sun-light rests, with mellow beam,
As loth to leave thee, oh, thow chang’d art thou!

The sky still bends above thee, beautiful
As ever, and the waters play around
Thy shadowy base with undimm’d joyousness;
But where is he, whose name is link’d with thine?
He of the deep, the firm, the noble soul,
Whose glory halloweth thy very sod!
His sons – blush, children! blush, for the vile deed
Your fathers did! – His sons, and where are they?
Pining, perchance, in slavery! My soul Is sick! If ye have tears, oh, let them flow;
For there is not, beneath your feet, one grain
Of earth, which hath not drunk his blood!
Ay, and where’er ye tread, your footsteps fall
Upon that dust, which once was full of life,
And love, and joy! – Walk lightly, for the soil
On which ye stand is now an empire’s grave!
It chanced that white men – whom the chase had led
Far from their homes, as o’er the mountain crag
They leap’d, with expectation burning high, –
Beheld him standing ’mong his prison cliffs.
The Past came up before them; all the wrongs,
The men had inflicted on their race;
Their burning cots; their murder’d children, wives
And friends; each scene of desolation rush’d
Upon their minds, and fir’d their hearts with rage.
They swore revenge! The aged chief must die!
He heard his fate : He plead; he pray’d; but vain
Were pleas and prayers! They bade him leap the cliff!
– A dreadful doom! – Calmly the warrior knelt,
His hoary tressed steaming in the wind,
And rais’d his hands to heaven: –
‘Great spirit, hear!
If innocence can aught avail with thee,
Let not my blood go down, without revenge,
To earth! But many my curse rest on this spot
Forever! and each thing – each living thing,
Perish upon these hills! and blight, and death,
And desolation wrap the scene!’

He paus’d, and roll’d his dark eye fearfully
Upon his murderers; and, as they quail’d
Beneath his deepening frown, he threw his form
Adown the awful precipice! Down – down
It plunged – until a mass of mangled flesh
Stain’d the dark rocks below! – And from that day,
The mountain and the puny lake, which laves
Its base, have borne his name – Chocorua.

Castle in the Clouds

The Birch on Elm 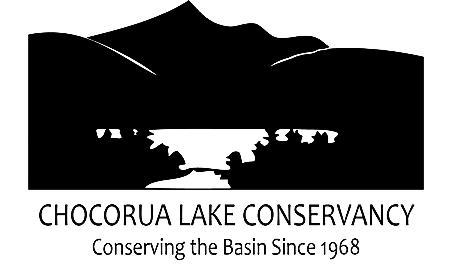 For every bottle of Chocorua sold, we'll be donating $1 to the Chocorua Lake Conservancy